When a star gets too close to a supermassive black hole, the gravitational forces tear it apart with some of the star's material thrown back in space to form a disk around the black hole. One such event, called a Tidal Disruption Event (TDE), was discovered by ZTF in April 2019 and is believed to be the source of a high-energy neutrino caught by the IceCube Neutrino Observatory. Image credit: DESY, Science Communications Lab

Neutrinos are abundant subatomic particles that are notoriously hard to detect. It's even harder to pinpoint their source and study their origin. Using ZTF as part of a program specifically designed to follow up neutrino detections, astronomers led by a team at Deutsches Elektronen-Synchrotron (DESY) have linked a neutrino caught by the IceCube Neutrino Observatory to a tidal disruption event, dubbed AT2019DSG.

"Chasing high energy neutrinos and seeing light from various acts by supermassive black holes is critical to progress in multi-messenger astrophysics. First, it was a blazar and now it is a tidal disruption event. The future is promising," says Mansi Kasliwal, an assistant professor of Astronomy at Caltech and co-PI for ZTF Phase 2.

Read the full story below.

For only the second time, astronomers have linked an elusive particle called a high-energy neutrino to an object outside our galaxy. Using ground- and space-based facilities, including NASA’s Neil Gehrels Swift Observatory, they traced the neutrino to a black hole tearing apart a star, a rare cataclysmic occurrence called a tidal disruption event.

“Astrophysicists have long theorized that tidal disruptions could produce high-energy neutrinos, but this is the first time we’ve actually been able to connect them with observational evidence,” said Robert Stein, a doctoral student at the German Electron-Synchrotron (DESY) research center in Zeuthen, Germany, and Humboldt University in Berlin. “But it seems like this particular event, called AT2019dsg, didn’t generate the neutrino when or how we expected. It’s helping us better understand how these phenomena work.”

The findings, led by Stein, were published in the Feb. 22 issue of Nature Astronomy and are available online.

Tidal disruption events occur when an unlucky star strays too close to a black hole. Gravitational forces create intense tides that break the star apart into a stream of gas. The trailing part of the stream escapes the system, while the leading part swings back around, surrounding the black hole with a disk of debris. In some cases, the black hole launches fast-moving particle jets. Scientists hypothesized that tidal disruptions would produce high-energy neutrinos within such particle jets. They also expected the events would produce neutrinos early in their evolution, at peak brightness, whatever the particles’ production process.

AT2019dsg was discovered on April 9, 2019, by the Zwicky Transient Facility (ZTF), a robotic camera at Caltech’s Palomar Observatory in Southern California. The event occurred over 690 million light-years away in a galaxy called 2MASX J20570298+1412165, located in the constellation Delphinus.

Peak brightness came and went in May. No clear jet appeared. According to theoretical predictions, AT2019dsg was looking like a poor neutrino candidate.

Then, on Oct. 1, 2019, the National Science Foundation’s IceCube Neutrino Observatory at the Amundsen-Scott South Pole Station in Antarctica detected a high-energy neutrino called IC191001A and backtracked along its trajectory to a location in the sky. About seven hours later, ZTF noted that this same patch of sky included AT2019dsg. Stein and his team think there is only one chance in 500 that the tidal disruption is not the neutrino’s source. Because the detection came about five months after the event reached peak brightness, it raises questions about when and how these occurrences produce neutrinos.

“Tidal disruption events are incredibly rare phenomena, only occurring once every 10,000 to 100,000 years in a large galaxy like our own. Astronomers have only observed a few dozen at this point,” said Swift Principal Investigator S. Bradley Cenko at NASA’s Goddard Space Flight Center in Greenbelt, Maryland. “Multiwavelength measurements of each event help us learn more about them as a class, so AT2019dsg was of great interest even without an initial neutrino detection.”

For example, tidal disruptions generate visible and UV light in the outer regions of their hot accretion disks. In AT2019dsg, these wavelengths plateaued shortly after they peaked. That was unusual because such plateaus typically appear only after a few years. The researchers suspect the galaxy’s monster black hole, with a mass estimated at 30 million times the Sun’s, could have forced the stellar debris to settle into a disk more quickly than it might have around a less massive black hole.

AT2019dsg is one of only a handful of known X-ray-emitting tidal disruptions. Scientists think the X-rays come from either the inner part of the accretion disk, close to the black hole, or from high-speed particle jets. The outburst’s X-rays faded by an unprecedented 98% over 160 days. Stein’s team doesn’t see clear evidence indicating the presence of jets and instead suggests rapid cooling in the disk most likely explains the precipitous drop in X-rays.

Not everyone agrees with this analysis. Another explanation, authored by DESY’s Walter Winter and Cecilia Lunardini, a professor at Arizona State University in Tempe, proposes that the emission came from a jet that was swiftly obscured by a cloud of debris. The researchers published their alternative interpretation in the same issue of Nature Astronomy.

Astronomers think radio emission in these phenomena comes from the black hole accelerating particles, either in jets or more moderate outflows. Stein’s team thinks AT2019dsg falls into the latter category. The scientists also discovered that the radio emission continued steadily for months and did not fade along with the visible and UV light, as previously assumed.

The neutrino detection, combined with the multiwavelength measurements, prompted Stein and his colleagues to rethink how tidal disruptions might produce high-energy neutrinos.

Stein’s team suggests AT2019dsg’s neutrino likely originated from the UV-bright outer part of the disk, based on the fact that the particle’s energy was more than 10 times greater than can be achieved by particle colliders.

“We predicted that neutrinos and tidal disruptions could be related and seeing that for the first time in the data is just very exciting,” said co-author Sjoert van Velzen, an assistant professor at Leiden University in the Netherlands. “This is another example of the power of multimessenger astronomy, using a combination of light, particles, and space-time ripples to learn more about the cosmos. When I was a graduate student, it was often predicted this new era of astronomy was coming, but now to actually be part of it is very rewarding.” 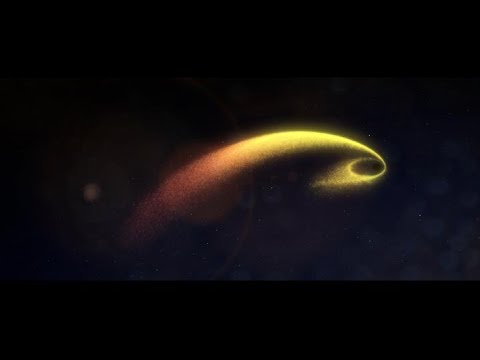