The first panel shows the ZTF image with the discovery of SN 2021 ijb/ZTF21aastazz. The second panel is a reference image and the third panel is the subtraction of panel 2 from panel 1 on which the supernova is clearly visible. Image credit: ZTF/Caltech

On 15 April, a transient candidate first discovered by both the Zwicky Transient Facility (ZTF) and ATLAS nine days earlier was labeled as Type Ia supernova on the Transient Name Server (TNS) - the official platform of the International Astronomical Union for reporting of new astronomical transients. It all seems rather routine, except it was not.  Supernova SN 2021 ijb/ZTF21aastazz was classified and reported to the TNS without any human involvement.

Once spectroscopic observations were triggered for candidate supernova ZTFaastazz, the baton was passed to a deep learning software system - SNIascore - that did the rest. Developed by a small team within the ZTF collaboration, SNIascore uses spectra from supernovae candidates to classify them with very high degree of confidence. The system then connects to the TNS and sends it a classification report.

SNIascore is the newest feature of the ZTF Bright Transient Survey, the largest spectroscopic supernova survey ever conducted. It is trained on 5000 spectra and for now, can reliably classify Type Ia supernovae but work is on the way to expand its capabilities to other types of supernovae.

"Until now, the whole process from getting a ZTF alert to observing it spectroscopically and announcing it to the community on the TNS required human involvement and could take several days. With SNIascore we’re down to almost real-time once the spectra are in,” says Christoffer Fremling, a postdoctoral fellow at Caltech who led the development of SNIascore, described in a paper published today on Arxiv.

The Bright Transient Survey with ZTF has so far cataloged close to 5000 transients. By the end of phase II of ZTF in 2024, this number will be close to 10000. With SNIascore, the transient community is alerted about the nature of these transients as early as possible, and can commence detailed observations with larger facilities as quickly as possible. This is important because many answers about the origin and physics behind transients are hidden in the first few hours or days after detection.

"We typically send 4-5 supernovae reports per night to the TNS, so the transient community will definitely benefit from this faster classification,” says Don Neill, the principal scientist of the SED Machine - the robotic spectrograph mounted on the 60-inch telescope at the Palomar Observatory that regularly performs follow-up observations based on ZTF alerts.

In the future, fully automated spectrographs such as the SEDM equipped with software like SNIascore could be used to systematically classify the large numbers of bright transients expected from the Vera Rubin LSST survey. 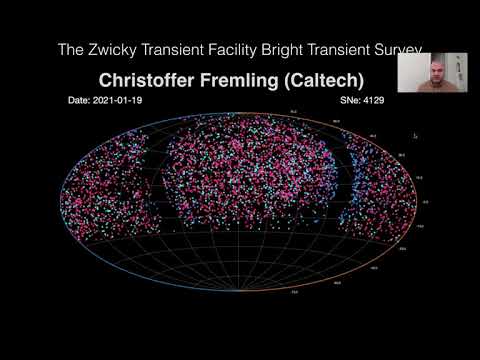